Deciding the first step is a type of question where pupils are only asked to decide explicitly which step to perform. A pupil reviews the problem type and identifies what steps he/she needs to take. After acquiring knowledge of a particular step then automatically the end of each step triggers the start of the next one. I will be looking at some questions which test whether pupils can decide on the correct step to perform, and compare them to more commonly asked questions which make the decisions for pupils.

What two numbers do I multiply first?

The correct answer to all the above questions are the same. However, the first question being asked makes the decision for the pupil because they are told that they are to multiply, and which numbers to multiply. The second question is testing whether the pupils know that we multiply the numerators, and then multiply the denominators, but the decision is being made for the pupils. It is possible that a pupil will give a wrong answer by stating two numbers that we do not multiply (4 x 11). The final question is specifically asking a question to test if a pupil knows what step to perform, compared to the first two question.

What do I cross-simplify first?

Again, the first question makes the decision for the pupils compared to the second question. The second question is testing if a pupil can recall the first step in answering this question. This problem type is different from the one above because you can cross simplify. And I would consider cross-simplifying the first step to the procedure but simplifying the product of both fractions can happen after a pupil has multiplied the two fractions.

Compare these two questions being asked by a teacher to a set of pupils:

What is the first fraction as an improper fraction?

Again, the first question makes the decision for the pupils. Furthermore, the first step of the previous two problem types cannot be applied here because there is a necessary step before both fractions can be multiplied.

The decisions pupils have to make to attempt the following calculations, vary:

The following question – “What is the first step?” not only helps pupils to learn explicitly which step to perform first but it also allows pupils to distinguish between different problem types. This is because a pupil is then attaching their knowledge of what decision to take depending on the make-up of the question. They are acquiring surface knowledge of the problem type – If I see mixed numbers when I am multiplying fractions then I must convert them to Improper fractions first.

This form of questioning allows pupils to develop mathematical reasoning around different procedural calculations. For example, a pupil recognises that to multiply mixed numbers we must convert them into improper fractions because we cannot multiply 1 with 1 and 4/5 with 2/11 because 1 and 4/5 is not 1 x 4/5 but 1 + 4/5 which equals to 9/5. This also consolidates pupils existing knowledge of mixed numbers and their equivalent forms as improper fractions.

Another example which is interesting is making decisions about the first step when comparing two negative fractions. Here are the different problem types and the first step to each one. The question posed for all the problems below is “Which is greater?” 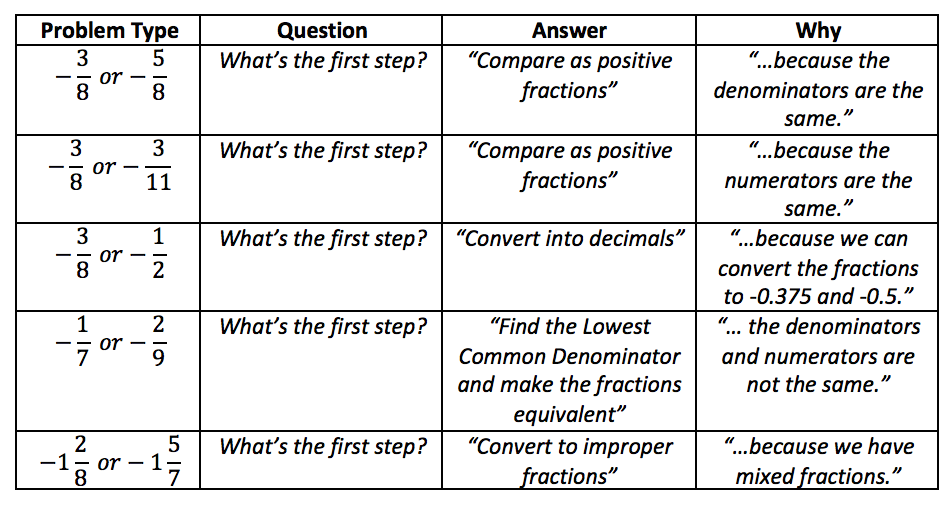 In order for this site to work properly, and in order to evaluate and improve the site we need to store small files (called cookies) on your computer. Over 90% of all websites do this, however, since the 25th of May 2011 we are required by EU regulations to obtain your consent first. Cookie settings RejectACCEPT
Privacy & Cookies Policy